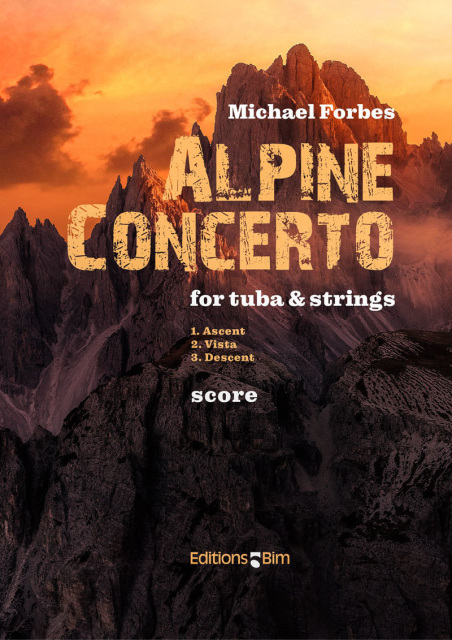 This package includes a large format orchestral score & solo tuba part. The string & timpani parts are only available as a rental from Editions BIM. Inquire here:

When I was asked to compose a new full-length Concerto for Tuba and Strings for the 2020 Geneva International Tuba Competition’s final round, I immediately began to dream of my visit to Switzerland and of course, the Alps.  Perhaps it’s a trite notion, but it simply made too much sense to me to try and capture the majesty and beauty of these enormous geological features with the large sound of the tuba.

In deriving inspiration for the work, I remembered the many hikes I’ve taken up mountains (including the Alps and the Dolomites) as well as the Rocky and Appalachian Mountains here in the United States.  The parallel tasks of climbing a mountain and composing a major concerto for my beloved instrument, seemed too obvious to pass up, so I embarked on my journey up the mountain and into this new programmatic and often musically cinematic piece.

The first movement is truly an “Ascent” into majesty and mystery of the Alps.  One can hear in the introduction some of the main themes and motives in the work, much like one can trace the map or line of ascent as they begin their planning of the voyage.  Once the solo tuba enters, the hike has begun, and one cannot but feel the oppressive weight of the challenge before the metaphorical hiker and the soloist.  Eventually the piece picks up speed dramatically and we’re off into the first movement featuring technical and lyrical melodies depicting the awe-inspiring quest. While climbing is hard work, there is a tone of sheer joy as the soloist sings their way through the foothills. Eventually we land into the pizzicato development of the movement, where the real heavy lifting and climbing begins—and the soloist even veers off the trail for a moment.  Eventually the soloist finds their way back to familiar territory before making their final dramatic steps to the summit.  Once the zenith is reached, the movement comes to a rapid close as the breath-taking view stops our soloist in their tracks.

In the second movement I endeavored to once again strike an awe-inspiring tone with different colors and effects from the strings to evoke the beautiful “Vista.”  The music at the introduction is literally like looking down from above.  Eventually we return to the main motive of the work as if looking back down to the base of the mountain where the hike began.  The work climbs high as we raise our gaze to the heavens and soak in the panoramic views and the sunshine.  Finally, as the sun begins to move toward the west, our soloists prepares for the arduous task of climbing back down, but takes a final moment to enjoy the view one last time.

The third movement,  “Descent” begins in many ways like a funeral march.  As experienced climbers will know, the first few steps of the descent are often the hardest as your body has been enjoying the relaxation while soaking in the view and tender muscles and ligaments are not quite ready to be engaged again.  Nonetheless, we march our stiff body onward and begin our long and tiring descent.  There is a jaunty tone here in this rondo where our hiker is almost giddy with a sense of accomplishment.  There’s a pep in their step, and yet this is when things can be the most dangerous.  More hikers are injured on the way down as they lose their concentration and let their guard down.  In the middle of this movement we hear rocks begin to tumble, and our hiker begins to stumble.  Through some challenging maneuvering they maintain their balance and eventually emerge unscathed.  If it were not for executing a good deal of exquisite expertise, our hiker could have been seriously injured.  Finally, the work returns to earlier themes as we get back on track and ultimately begin to feel a sense of ultimate achievement.  Ever triumphant, our soloist finally reaches the base of the mountain and strikes a low tone similar to how they began.  While the goal of climbing the mountain had the gift of the vista, the sense of accomplishment at the end of the climb is perhaps even more rewarding.