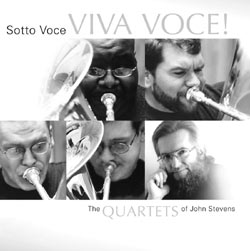 The following insight has been generously provided by composer, John Stevens.

The music on this recording represents virtually all of my original compositions for tuba quartet.  The works span some 27 years, although most of them were composed in the 1970s.  With the exception of the last two works on the CD, which were written especially for the Sotto Voce Quartet and this recording, all of these pieces were originally conceived (for a variety of reasons) for tubas only, or for tubists perhaps playing the upper parts on euphonium.  Only in the years since most of these pieces were composed has the tuba quartet, with two euphoniums and two tubas, become the standard instrumentation for low brass chamber groups.  Many quartets all over the world have played these pieces as they were originally written, and it has not proved necessary to change the tessitura or key of the works for performance of the upper parts by euphonium players.

Although at least five of these works have been recorded by other groups, this is the first recording of my complete[1] quartets.  I am most grateful to the members of the Sotto Voce Quartet for their interest in this project and for their fantastic performances of my music.  It has been a joy to be involved with so many facets of this recording, and my continuing personal and musical collaborations with the quartet and its individual members is something that I cherish very much.  Thanks guys....

My compositions, especially in the early years of my career, have been strongly influenced by jazz and popular music.  With these quartets, I was often striving to fight tuba stereotypes by creating clear, driving, exciting music that would find a “groove” even without a rhythm section to provide it.  Being a tubist and jazz performer myself, it was also important to me to encourage other tubists to play in jazz styles and improvise. Four of my early quartets require performers to improvise solos over chord progressions or to perform their own cadenzas.  I am thrilled at the level of excitement that the improvised solos on this recording bring to my music!  The currency of their styles, much different than I would have had in mind 25 years ago, has added a freshness to these works that I find very rewarding.  This collaboration between composer and performers to create something special is, to me, one of the most important and exciting aspects of making music.

Although I never studied traditional composition in a formal sense, there are many mentors and colleagues who helped me develop my skills as a writer and shape the musical ideals that resulted in these pieces and my many other original works.  I am especially indebted to Chuck Mangione, Rayburn Wright and the many friends and colleagues from my undergraduate days at the Eastman School of Music for starting me down my creative musical path.  I am also grateful to Tom Fay, a faculty member at Yale during my graduate years, for taking the time to look over and critique my early quartets and for encouraging me to keep writing.  Finally, thanks to someone who I donâ€™t thank enough . . . to Meggie, the power behind my dances and diversions.  Viva Voce, eh??!!

The first three works on this recording, POWER, MUSIC 4 TUBAS and DANCES, were composed while I was a graduate student at Yale University (1973-75) getting a MM degree in Tuba Performance and studying with Toby Hanks.  At the time, I was only dimly aware of the development of the tuba-euphonium ensemble by people like R. Winston Morris at Tennessee Tech. and Connie Weldon at the University of Miami (FL).  The New York Tuba Quartet, of which Toby was a founding member and that I would later join, was just forming.  Under their influence and Toby’s guidance, fellow tuba students Ken Singleton, Charles England, Mike Thornton and myself performed as the New Haven Tuba Consort.  The lack of euphonium players at or around Yale, along with the NYTQ serving as our model, meant that these works were conceived for tubas only.    POWER is probably my most often performed work, and it has been recorded by numerous groups with various combinations of tubas and euphoniums.  In its first recording, it was the title selection of an LP recording of several of my original compositions using tuba, performed by myself with friends and recorded in Miami, FL in 1984.  MUSIC 4 TUBAS was premiered by the New Haven Tuba Consort and later recorded by the New York Tuba Quartet on their LP album titled “Tubby’s Revenge.”  DANCES, which is for solo tuba or euphonium and three tubas, was premiered on my Masters recital at Yale, with myself as the soloist in my only public performance ever on the F tuba (borrowed from Toby).  It was later recorded by Toby Hanks and the New York Tuba Quartet (I was a member by then) on Toby’s “Sampler” album.  I am most gratified that, like POWER, this work has remained in the repertoire for tuba and euphonium performers for so many years.

MANHATTAN SUITE was composed for a tuba quartet I was a member of prior to joining the NYTQ.  The other tubists were Dave Brainard, Bill Keck, and Warren Deck in his pre-NY Philharmonic days.  I was a free-lance performer in New York at the time, but I wrote this piece in my spare time over a three-week period while I was playing in the orchestra for an opera production in Norfolk, VA.  In the early performances, I played the top part on the euphonium, using a special, large mouthpiece that I still use on that instrument today.  MANHATTAN SUITE was recorded by the University of Michigan Tuba Ensemble and, many years later, the Dutch Tuba Quartet.

DIVERSIONS was composed for the New York Tuba Quartet, and we premiered it when we were featured on a special jazz concert at a New York club called Storyville.  Although we (Toby Hanks, Sam Pilafian, Stephen Johns and myself) were all tubists, the original intent was for Toby and I to play the top two parts on euphonium.  As far as I know, this is the first recording of this work.

MOONDANCE was commissioned by the Summit Tuba Quartet, an “all-star” group affiliated with the Summit Brass.  The members of the quartet were Roger

Bobo, Dan Perantoni, Harvey Phillips and Gene Pokorny.  They recorded the work on the Summit Brass “American Tribute” CD.  MOONDANCE has also been used as a competition piece at various tuba/euphonium conferences.

FANFARE FOR A FRIEND is the only work on this CD that is not a quartet, and I thank the Sotto Voce guys for letting me join them on this one.  This piece was composed for German tubist Dietrich Unkrodt and a group he directed called the Berlin Tubists.  I met Dietrich at the 1990 International Tuba/Euphonium Conference in Sapporo, Japan where, in addition to performing, he gave a moving and memorable speech about the unification of Germany that had just taken place.  When he later asked me if I would compose something for his group, I was happy to write this short work in the spirit of global friendship.  Because of this ensemble’s makeup, the piece was conceived for tubas, but with the knowledge that the upper two parts might often be played on euphonium.

When the Sotto Voce Quartet came to me and said they would like to record all of my quartets, I immediately planned to add to my output in this genre by writing something especially for them and this recording.  Ultimately, I decided to compose two short, contrasting works, and the result is VIVA VOCE! and BENEDICTION.  VIVA VOCE! Is meant to have the same impact as POWER.  Like a drag race perhaps, it is a burst of driving energy that, although short, should leave the listener somewhat breathless.  BENEDICTION, on the other hand, serves as kind of an “amen” to the recording and a reminder that the lyrical sonority of the tuba-euphonium ensemble is perhaps its most wonderful characteristic.  These two short works demonstrate the diverse musical possibilities of a tuba euphonium ensemble, especially one as talented and dynamic as the Sotto Voce Quartet.

The Quartets of John Stevens

When Sotto Voce decided to become recording artists, two major projects popped into our collective minds.  The first reflected a desire to record a disc that would display our overall musical direction and the path we envisioned for the tuba/euphonium quartet genre.  This resulted in “Consequences” (Summit Records:  DCD 322), an eclectic mix of compositions and arrangements that were created for the quartet primarily by its members.  The second project was this recording.

John Stevens and his music were extraordinary influences on both the individuals within Sotto Voce and the group itself.  His multifaceted musicianship stirred something in each of us, as we were all drawn to the University of Wisconsin where John serves on the music faculty.   His inspirational teaching regularly encouraged us to strive for the highest level of creative musical expression.  Meanwhile, we began to better understand these concepts by rehearsing and performing works that he had penned.

We strongly feel that it was this kind of comprehensive tutelage that helped spark the special musical cohesion that exists in Sotto Voce.  As a founding father of the tuba/euphonium quartet genre, John instilled among us a desire to take our quartet through musical frontiers that had not yet been explored by an ensemble of our instrumentation.  Moreover, his success in life as a teacher, composer, conductor, and all-around superb musician has given us the leadership and confidence to obtain our own musical goals.

At the same time, our many kindred talks over countless beverages have given us all a prospective on who John Stevens, the man, really is.  A friendship has developed among the five of us that is difficult to put into words.  We simply hope that listeners of this recording can hear the sentiment that is present in our performances of these works.  Not only is John Stevens our ultimate mentor, he is like a father to us all.

In many ways, this recording is meant to serve as a big “thank you” from the tuba/euphonium community for this brilliant collection of groundbreaking quartets.  But on a more personal note, Sotto Voce would like to thank you, John, for all the inspiration you have given us through the years.  The wonderful opportunity to record your works was simply a thrill for us, and we hope it serves as a small token of appreciation for all you have done.

[1] Two works specifically for young players and a short, somewhat comic work composed especially for Germany’s Melton Quartett have not been included.]