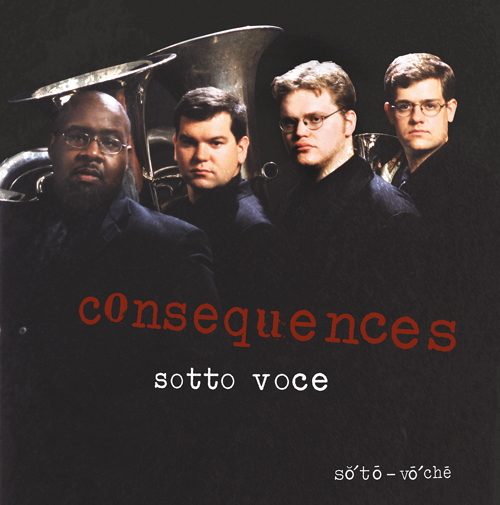 SKU:
$15.00
$12.00
$12.00
Unavailable
per item
Sotto Voce Tuba Quartet's first internationally acclaimed recording featuring a potpourri of musical styles from Bach to early-jazz.  Original works written for Sotto Voce that have become staples in the repertoire, including the title track are also on this album.
Add to Cart
The Sotto Voce Tuba Quartet
presents
CONSEQUENCES

As a “consequence” to winning the Colonial Euphonium/Tuba Institute’s Quartet competition in 1998, Sotto Voce was granted a performance at the 16th Annual U.S. Army Band Tuba/Euphonium Conference.  Consequences, intended as a flamboyant concert opener, was composed for the quartet just a week before the performance.  With its ripping beginning and rhythmic interplay, the work gives the quartet—and its individual members—an adventuresome challenge from beginning to end.  The work has found itself a useful addition to the repertoire and has been selected for competitions and recordings across the globe.

This 18th century motet by Italian composer and Abbé, Quirino Gasparini (1721-1778), was originally attributed to W.A. Mozart.  In fact, it was Wolfgang who was influenced by this lesser known Italian composer through the relationship between Gasparini and Leopold Mozart, Wolfgang’s father.  Though Gasparini had some success as an Opera composer, he primarily composed religious vocal music.  This liturgical setting is perhaps one of his most famous works and is part of Donald Miller’s “Two Transcriptions” for trombone choir.

The Art of the Fugue is arguably one of the greatest monothematic compositions in the history of music.  The subject, from which the fugues stem, is very simple in its design, thus allowing Bach to make extravagant use of counterpoint. Contrapunctus IX is intriguing because it is the first fugue to begin with the countersubject.  Never having stated a specific instrumentation for these contrapuncti, many different groups of instrumentalists have taken it upon themselves to transcribe these works.  Imagine, however, Bach performing this work on the organ pedals alone!  Though this probably never happened, this arrangement for tubas and euphoniums is intended to achieve the lucidity analogous to the composer’s original intentions.  Bach began composing the Art of the Fugue in 1749, but left it unfinished at his death in 1750.


The writings of the great Scandinavian philosopher and theologian, Søren Kierkegaard (1813-1855) were the source of inspiration for this tuba quartet by the notable New York composer, Meyer Kupferman (b. 1926).  Just as Kierkegaard’s theological writings were stridently “against the system,” Kupferman also pushes and pulls at established musical traditions in creating his own tonal and rhythmic fabric.  There are moments in the work where it could be said that Kupferman was emulating Kierkegaard’s state of violent mental unrest; while at other times, there are ethereal episodes of serene peace.  Written for Roger Bobo in 1979, Kierkegaard is an intriguing work for players and listeners alike.

Haydn was inspired to compose his greatest oratorio, The Creation, while in London after hearing Handel's Messiah for the first time.  He began writing the piece in 1796 and it received its premiere two years later.  The Creation is a musical portrayal of the world’s first week as described in the Bible.  Achieved is the Glorious Work (Chorus No. 28) is a microcosm of the entire work in that it praises God for creating all things magnificent and beautiful and states that "[His] praises shall be our song."   This arrangement incorporates both the orchestral and vocal passages from this part of the oratorio.


Petites Litanies de Jésus (translated: The Little Prayers of Jesus) is from a collection of eight short piano pieces entitled L’almanach aux images by French composer and pianist Gabriel Grovlez (1879-1944).  Published in 1911, the pieces were inspired by the poetry of Tristan Klingsor, a French poet who was a member of Les Apaches (a group of artists, which included Ravel, who frequently met to perform and discuss one another’s work in the early 1900’s).  With its consistent use of parallel motion, plainsong-like melodies, and antiphonal form, Petites Litanies de Jésus blends the sounds of Medieval organum with the colorful harmonies and delicate simplicity often associated with French composers from the early 20th century.

Patrick Schulz’s second quartet, written for the Sotto Voce Tuba Quartet, presents a musical portrait of every individual within the ensemble.  Each of the four movements attempts to capture the essence of a different quartet member’s personality.  While the outer movements showcase the playing of the “outer” members in the quartet (2nd tuba in the first movement and 1st euphonium in the last), the inner movements provide a short glimpse into the minds of the “inner” players (2nd euphonium in the second movement and 1st tuba in the third).


The first movement, Abrasive, pits the 2nd tuba player, Mike, against the other three players in a battle of styles, tempos, and dynamics.  Mutes help the upper three players separate themselves from the often harsh and aggressive playing that Mike must use to portray his own gritty persona.

Light and Playful depicts Nat, who has been known to enjoy the occasional comic book, the toys from various kids cereals (and the cereal), and assorted “gummy” foods. Mixed meter and jazz-like harmonies allude to his incredible improvisational abilities.

Reflective is a portrayal of how the composer imagined himself while writing the entire piece—reflecting on all the quartet’s time together.  The movement uses some of Patrick’s favorite harmonies, key areas, tempos, and quotes from some of his earlier works.

Heroic is a 1st euphonium feature, written for Demondrae, which incorporates two solo cadenzas into an extremely challenging and busy texture.  This movement, which begins with a tonal canon, quickly moves to a more dissonant and chromatic context, but maintains common motives throughout.  Tight and unrelenting ensemble playing is consistently demanded, in addition to the challenging solos in the 1st euphonium part.


Profiles was written at the University of Lincoln-Nebraska in the fall and winter of 1998-99.


This quasi-rock ballad was composed in 1996 just as Sotto Voce was just forming.  The work was written with the intent of representing a visual color with an
aural art form.  In addition to the lush harmonies, pointillistic entrances, and eloquent solo passages, the sonority of the conical instruments adds color to the placid texture.

From Handel’s Suite No. 5 in E Major, The Harmonious Blacksmith is a challenging show piece for the 18th century keyboardist.  Originally written for the harpsichord, this “Air (with Variations)” was published in 1733 and transcribes exceptionally for the tuba/euphonium quartet.  Just as the work shows the technical virtuosity of the keyboardist’s right and left hands, this arrangement demands virtuosity from the euphoniumists and the tubists, respectively.  In the end, the duos combine in a flourish rivaling the brilliance of any harpsichord.

The Lord's Prayer, originally composed for voice and piano, was written in 1935 by American composer Albert Hay Malotte (1895-1964). The text comes from the book of Matthew 6: 9-13 in the Bible. The arrangement of this lush setting in the romantic style explores the wonderfully rich colors and sonority of a tuba quartet.

One of the early jazz standards, Joe Primrose's St. James Infirmary came to fame largely as a result of Louis Armstrong and his “Town Hall Concerts.”  This arrangement for tubas and euphoniums gives the low-down feelings of loss associated with the infirmaries of New Orleans, but it also includes a swingin' up tempo section to liven even the loneliest spirits.  When Louis Armstrong and his band performed St. James,  it was always highlighted by the legendary trombone solos of Jack Teagarden.  A transcription of one such solo was included in the first euphonium part in this arrangement.


Dixieland music seems to translate especially well to the tuba/euphonium sound, and this standard tune from the early 1900’s is no exception.  Its simple, twelve-bar framework gives the arranger and the players a great deal of freedom for artistic expression.
Proudly powered by Weebly