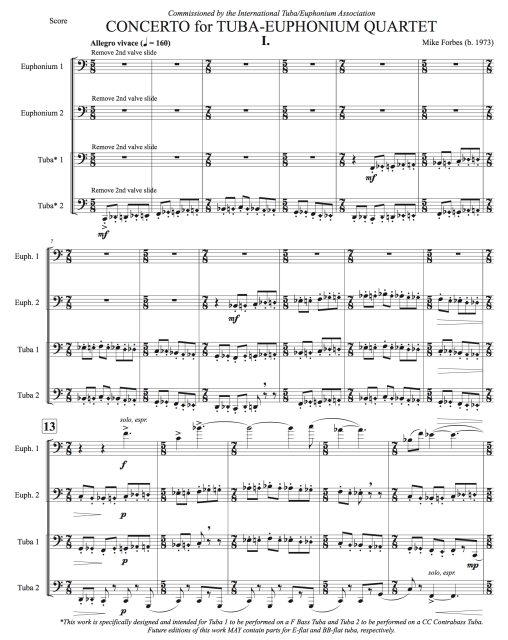 The International Tuba/Euphonium Association (ITEA) commissioned Mike Forbes in 2019 to write a large, comprehensive work that would both push the tuba/euphonium quartet genre as well as add a substantial new work to its repertoire. This resultant 18-minute, 3 movement work, "Concerto for Tuba/Euphonium Quartet" challenges the players and their ensemble immensely as the Sotto Voce Quartet showcased on their premiere of the work on Monday, May 27, 2019 on the opening concert at the International Tuba/Euphonium Conference (ITEC 2019).

In the first and third movements of the work, Forbes utilizes a technique he first used in his "Grumpy Troll" solo work where players are asked to remove (in this instance) their 2nd valve slide. Due to this issue, the work is intended for a tuba/euphonium quartet specifically comprised of 2 B-flat euphoniums, 1 F tuba and 1 CC tuba. However, some quartets are made up of E-flat and BB-flat tubas, respectively, and the PDF download of this order, will come with those substitute parts. Those parts may be intermingled with the original parts (E-flat tuba 1 with CC tuba 2 for example), but the work should not have 2 different instruments doubling a single part (BB-flat tuba 2 and CC tuba 2).

In the 2nd movement, there is a section for 4-part (8 tones) multiphonics. Though different octaves may be chosen to suit individual's voice parts, players may also decide to study the score and move some of the multiphonic parts around the quartet in order to best accommodate everyone's specific vocal needs--this is what the Sotto Voce Quartet didin the premiere as well. The third and final movement is an exciting rondo in 6/8 more synonymous with Forbes's earlier works for the genre.